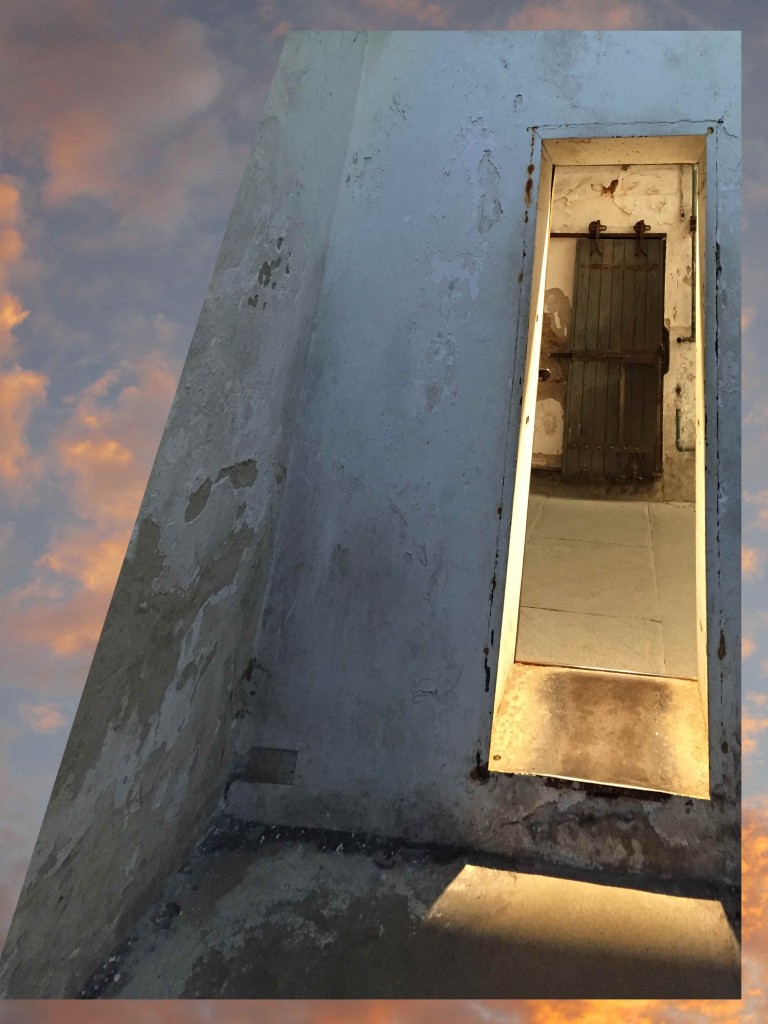 Do you ever feel like, no matter how hard you try, you can’t escape the conditioning you were raised with and the limiting beliefs you hold about yourself?

Do those beliefs feel like your own personal Alcatraz, denying you the freedom to live the life you want to live or become the person you want to be?

If so, I’d like to share something I learned twelve years ago when I was sentenced to maximum security at a federal prison. (I had refused to pay the fine for doing nonviolent civil disobedience when the US launched its attack on Iraq.)

When I walked into the lobby of the prison on that April morning, along with about a dozen others who were arriving to serve the same week-long sentence, I stepped into a surreal world of guards, handcuffs, concrete walls, florescent lights, locked doors, strip searches, and orange jumpsuits.

What immediately struck me was the absolute artificiality of the setting. There was nothing natural here—an irony, given that we began our sentence on Earth Day.

But the artificiality that I was picking up so strongly didn’t simply have to do with the walls and florescent lights. The prison was artificial because it was expressing an illusory idea, a falsehood, a concept so foreign to Reality as to be utterly meaningless.

By that time in my life I had already had life-changing spiritual experiences that had shown me that the world we inhabit, the world we have created, is founded upon an idea in our minds that is completely erroneous: the idea that something called separateness exists. This idea lies at the foundation of how we see ourselves and how we see and construct the world around us.

When I arrived at the prison that day, I perceived in a visceral way that incarceration is the epitome of that illusion. Prison is an institution that is intended to maximize the experience of separateness. Its purpose is to cut a person off from nature, from loved ones, from the dreams and possibilities of one’s own life.

The irony is that in Reality, separateness doesn’t exist. Which is to say, prison is a story we have made up, one based on an artificial premise—a story we have fashioned into walls and locks. Which brings me back to your personal Alcatraz.

The prison in your mind that seems to separate you from the life or Self you desire is also a story. It is completely artificial, having no basis in Reality.

But how is it, then, that it can possibly seem so real? How does a mere story have the power to imprison you in circumstances you want so desperately to escape? And even more to the point: story or not, how do you break free?

Let me respond by sharing an experience from my time in the Federal Detention Center.

The Madness of the Human Condition

One day the guard was escorting me, my hands handcuffed behind my back, down the corridor to the visitation room where a couple of volunteers from a prisoner visitation organization were waiting to see me.

As we approached the guards’ station at the end of the corridor I saw a man, wearing a prisoner’s jumpsuit, standing in a glassed-in holding room. His face was bloody, and the glass wall was streaked with blood. I overheard the guards talking with each other about how he had been pounding his head against the wall until he bled.

As we drew nearer, the man looked at me with haunted, wild eyes. In the instant we made eye contact, I was suddenly able to see into the madness of the human condition.

We perceive ourselves to be imprisoned in an idea of the mind’s own making: that we are separate selves, cut off from our Source, condemned to a sentence of aloneness, believing judgment and condemnation are real. And here is the key: we bang our heads against this illusion until we bleed.

The Key to Freedom

When you feel imprisoned by the stories and limiting beliefs in your mind, your freedom will not be found in dwelling on the stories themselves. They are illusory. Meaningless. They have no power.

Look instead at how you are resisting the stories. That is where your captivity lies.

You see, when you resist the stories, you are interacting with them not as stories, but as something real that needs to be resisted. And then voilá, they become real to you. They become your own personal prison. Such is the power of the mind.

Let me give you an example. Suppose a thought crosses your mind that says, “I don’t deserve happiness because I’m a purple Martian.” Would you expend any energy trying to attack that thought, disprove it, escape it? Of course not. You know it’s clearly nonsense. But in the moment you think you need to resist the thought, you have given it power. Now you are suddenly engaged in an endless battle, trying to escape your situation of being a purple Martian.

Believing you are a purple Martian is no more ludicrous than believing that you—a divine, radiant Being, the very expression of the Love that powers the Universe—can be defective or deficient in any way.

So here’s my advice: When you find yourself banging your head against beliefs and judgments you hold about yourself, beliefs that seem to keep you imprisoned in a life or a self you don’t want, drop your resistance. Say to yourself: This is simply a story I am entertaining, nothing more. When you stop attacking them, you will soon discover that the walls dissolve on their own.