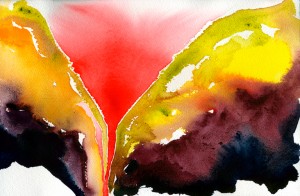 Where did the expression “leap and the net will appear” come from? When did it come into use? Is there evidence for its veracity? I guess I don’t have enough faith to assume that this vast Universe cares enough about any particular leap of mine to put a net under me in the nick of time.

Several years ago I was driving along a familiar road when out of the corner of my eye I saw a large hawk, high on a branch in a cluster of pines. I pulled over immediately and shut off the engine to watch this bird sitting silently amidst wind invisibly setting needles and branches dancing.

The bird was quite still. I watched. Time telescoped. I don’t know how long we stayed that way, in spacious time.

Spaciousness feels liberating –– a big inhale, ribs expanding, arms extending wide, followed by an exhalation of great relief. So comforting. A friend once explained her experience of Sabbath as “A Palace in Time.” In the luxury of spaciousness I can float, buoyed by invisible currents of thought or creativity or simply being. Yet without a center that can hold, vast openness can provoke anxiety.

To be able to hear bird calls I must remain very still and quiet. Sometimes even the sound of blood flowing deep in my ears distracts me from the depths of listening. When I still my watching, the subtle Rigpa dance of nature becomes evident. Each leaf and branch moves ever so slightly, as each breath and squeeze of the heart moves me. At the quantum level, is anything ever completely still?

Resting in that space I continued to watch.

Still the hawk remained, perched almost imperceptibly in the dark evergreens. With no warning the hawk spread its wings, fell into the air and glided out of sight. It never flapped its wings. That hawk did not leap into a net that might or might not appear.

Hawks are sharp-eyed, fast and quiet, careful and precise. That hawk fell onto wind that solidly held it. We don’t see wind. We see and hear evidence of it, the rustling movements it sets in motion, its caress of our skin.

That hawk did not leap. You could say its action was instinctual, but I think a younger, less experienced bird might have tumbled downward. It seemed effortless, artless, but it wouldn’t have happened without the hawk’s deep experiential body of knowledge, the feel of air currents learned from spiraling on who-knows-how-many thermals. It knew the wind. It knew onto which currents it could fall and be supported.

The hawk did not leap, nor did it need a net. It dropped into being lifted and was carried neither on courage nor faith. As I witnessed its grace, I ached to be invisibly held and supported.

Here is the problem: I don’t believe if I leap the net – a net – will appear. And yet I can, on occasion, leap. I leapt into my life as a painter: certainly not a wise career choice.

One of the reasons I paint is that I want to record both what I witness and how I experience it physically and emotionally in my body-mind-heart. I am not a wordsmith. I may be able to record and transmit my experience via color and gesture. Perhaps that will generate a response in you, the viewer. Perhaps later it will reveal more to me. I painted the gesture of the hawk spreading its wings, and of it falling onto the wind. I wanted to be that hawk, secure in its body of knowledge, unconcerned with faith, or faithlessness, or the appearance of nets.

Perhaps I can consolidate the lessons of my life’s experiences –– of  “falling and weeping, laughing and leaping” –– into a bodily knowledge of when it is unwise to leap, and when a leap will be supported. Perhaps, if I look at them long enough, these paintings will teach me about trusting, not in abstract nets but in the invisible and sure support of the wind, and in my own experiential intuition of its presence.

Perhaps, like the hawk, I can join in a pas de deux with the wind.

Sara Steele is an artist whose work is in over 200 collections and has been exhibited throughout the United States and in Europe, and has been seen around the world through her annual calendar, now in it’s 33rd edition. An activist as well as an artist, Steele works on environmental issues such as ending fracking (hydraulic fracturing for natural gas,) energy efficiency and climate change, as well as on women’s issues, education, peace, social justice, and domestic violence prevention. Her pieces are often used to promote and raise funds for organizations working on such causes. She also co-leads workshops with Patricia Pearce.  Visit her website by clicking on the image below.