In the heart of my neighborhood here in Philadelphia stands an imposing building that looks like a medieval fortress complete with turrets.

The idea that was envisioned and which took on form at Eastern State Penitentiary was that a person found guilty would be removed from society for a period of time to contemplate, without any distractions, what they had done. The belief was that, by contemplating their wrongdoing, inmates would reform themselves. They would become penitent, hence the name penitentiary.

It was the first time that time became the sentence for a crime, and people doing time at Eastern State Penitentiary when it first opened had absolutely no contact with other human beings. They were kept in their own cells, handed their meals through small openings in the wall, provided a Bible, and given lots of time to think.

What the people running the penitentiary discovered, though, was that rather than becoming penitent, the inmates started going insane. They were subjected to what we now know as solitary confinement, something that is completely unnatural for human beings, social creatures that we are. (After a year of COVID, some of us had had a glimpse of the toll isolation can take.)

Frequently, when I pass by Eastern State, I think of how the penitentiary is a carefully architected depiction in stone of our story of separateness. Most of us, most of the time, live inside a sort of prison of the mind, believing and perceiving ourselves to be cut off from one another, from the Earth, from the Source of our Being, even from our true Self. This perception, even though it is illusory, has resulted in us feeling an existential displacement from the community of All Being.

Many years ago I got an inside glimpse into what actual incarceration is like when I was sentenced to a week in federal prison for engaging in civil disobedience when the US launched its invasion of Iraq. It seemed symbolic that I and the dozen others protesters who were sentenced with me, had to report to the Federal Detention Center on Earth Day.

Walking into that prison, leaving the spring sunshine and blossoming trees behind and stepping into the completely artificial environment of cinderblock walls, florescent lights, cell blocks and locked doors, was one of the most surreal experiences I’ve ever had.

While I was there, I reflected on what it would be like to be in this environment year after year.

Earlier in the day I had stood with my eye glued to a tiny pinprick of clear glass I had discovered on the frosted window of our cell. Smaller than the head of a pin, it was my only view to the outside world. Looking through it I could make out the basic outlines of buildings, cars, a distant highway. I realized that for me the cruelest aspect of imprisonment would be to live months and even years never seeing a moonrise or a flower opening to the sun, never feeling the breeze on my skin or breathing in the smell of the woods after a rain, never hearing birdsong or touching the rough bark of a tree or walking a beach and feeling the sand beneath my feet. Ripping people away from the web of life and caging them in a world of artificial lights and unyielding surfaces was inhumane, the antithesis of the spiritual truth of interconnection. [ excerpt from Beyond Jesus: My Spiritual Odyssey]

This is the month when we celebrate Earth Day, an observation that calls us to renew our relationship with the Earth and to restore the damage done by our dream of separateness. It is a time for us to bring down the walls of isolation that we have built within ourselves so that we can know our oneness with all life on the planet. 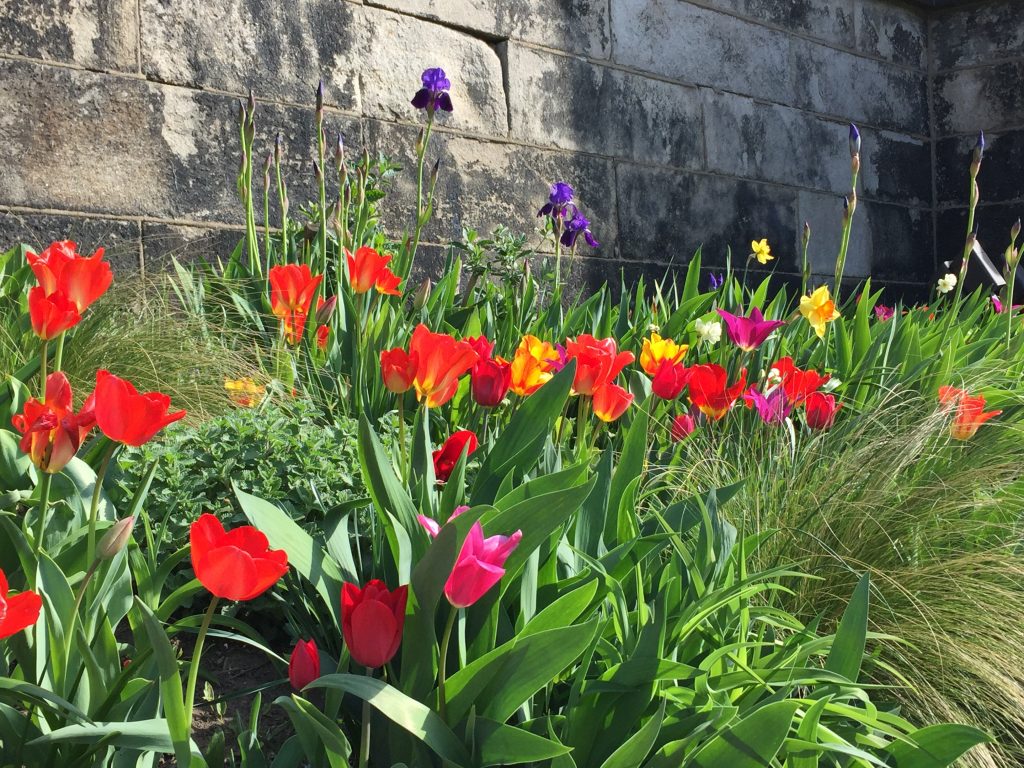 The other morning, I took a walk around Eastern State Penitentiary. It was a gorgeous April morning, and the flower beds in front of the prison were brimming with hundreds of daffodils, tulips and iris. Along one of the towering walls the air was full of birdsong, as birds flitted in and out of cracks and crevasses between the stones where they had found safe places to build their nests.

That this historic site, such a graphic symbol of humanity doing time in our story of separateness, should now be a place where birds can hatch new life and daffodils and tulips open their petals to the sun moved me. It reflected the shift so many of us sense is happening on the planet right now as we move beyond the egoic consciousness of separateness and into an awareness of the truth of Love.

And just as moving was coming upon a gathering of toddlers and their parents sitting on the grass, in the community garden that has been created on the penitentiary grounds, under a canopy of flowering pear trees. They were being led in song by a young woman reading a story to them that had a recurring chorus, a story titled One Love.