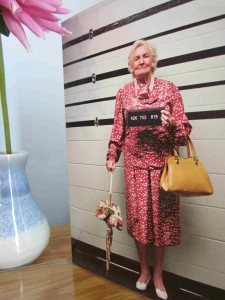 A couple weeks ago I posted a blog about overhearing an 80-year-old woman talking in my dentist’s office about her plans to do the next thing on her bucket list the following day: go skydiving.

I’d gotten my first draft done Monday morning and then stopped for lunch, and after I ate I stepped outside to get the mail. There, tucked between the bills and the fund-raising appeals, was a handwritten envelop, a rarity I always welcome.

I recognized the handwriting as my friend Susan’s, who was away on vacation, and when I opened the envelop and pulled out the card I laughed out loud. On the front of it was a picture of a well-dressed, dignified older woman posing for her mugshot.

I figured the reason Susan had sent me this card was that I was arrested once (well, okay, more than once) for doing nonviolent civil disobedience, and after one of those arrests Susan came to visit me while I was doing a week in jail.

But when I opened the card I laughed even harder. Inside it read: “Here’s to another check on the bucket list!”

Mind you, Susan didn’t know about my encounter at the dentist’s office the previous week, and she certainly didn’t know I’d been writing a blog post about it. In fact, as she explained inside the card, she’d bought the card for me weeks before, not quite knowing why it spoke to her so.

I texted her right away to tell her I’d just gotten the card, after starting on a blog post that morning about an older woman’s bucket list that included skydiving. She texted me back saying she’d just finished watching a video of her brother-in-law, niece, one of their friends and their pastor skydiving.

Synchronicity is a word that was coined by Carl Jung to refer to just such uncanny coincidences, when outer events mirror inner realities, and there was a time in my life when something like what happened with Susan’s card would have knocked my socks off. In fact, several years ago, after experiencing a barrage of such synchronicities, my former worldview simply collapsed. It couldn’t hold up before the onslaught of such inexplicable occurrences.

The cornerstone of that collapsed worldview was that my life — that I — was a discrete phenomenon separated from all else, and the events of my personal life were distinct from the events that took place in the external world. Unrelenting synchronicities were revealing to me quite the opposite, that everything is interconnected and it’s the worldview of separation that is irrational and indefensible.

Despite the ego’s fear that it is alone in this world, nothing could be further from the truth. Your life, my life, we are all part of a much bigger fabric of existence that our preconceptions often conceal from our sight.

What I have found is that as we open more and more to the spiritual life, we often begin to encounter more and more of these synchronicities — or perhaps we simply start paying attention and noticing them when they happen. I’ve also discovered that these synchronicities are often quite playful, which convinces me that humor is fundamental to Reality.

Another thing I’ve noticed is that when we start to act on our intuitions even when they don’t seem to make sense — just like Susan did when she bought that card for me — we find ourselves engaging with an unfolding story that is bigger than any of us.

I now have Susan’s card sitting on my desk to remind me that Reality is conspiring to lead us out of our lonely illusions, laughing all the way, and that I am being invited to play along.