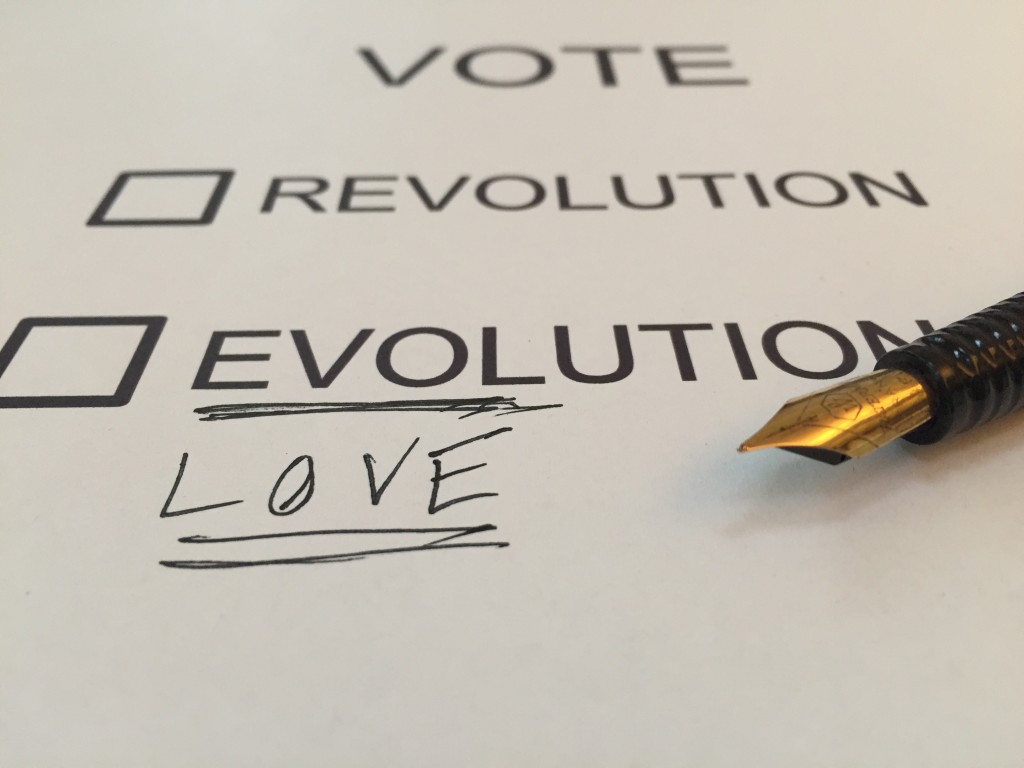 Many of us are heaving a sigh of relief that this presidential election 2016 is drawing to a close, yet we also know that the hostilities that have been playing out in our nation these last many months are not simply going to evaporate after the last poll has closed and the last vote tallied.

This Election Cycle: Prelude of Doom or Catalyst for Awakening?

On the surface, this election is about our values; what we will claim as our national identity; and whom we will choose to be our Head of State.

Looking from the perspective of the surface story, we are likely to view current events as evidence of a political, social, and cultural revolution.

But think for a moment about that word: revolution. Literally, it means to go around again. Or, in the vernacular: been there, done that, think I’ll do it again.

Revolution is a very old story. It is the story of replacing the present powers-that-be with new powers-that-be. It is a story of overthrow, of domination, of exclusion.

It is the saga of confrontation between warring factions to see who will hold the reins of power and who won’t — who will be favored, and who will be marginalized. It is the story of allies and enemies, winning and losing, us and them, the exploiters and the exploited.

In short, it is a story based on the idea of separateness — and if nothing else, this presidential campaign has called our attention to the prevailing story of separateness.

All of this, though, is merely the surface story. The much bigger story — the real story that you won’t read about in the newspapers or hear reported on CNN — isn’t a story of revolution at all. It is a story of evolution.

Evolution is about something new, something unexpected, something that has never existed before. It is about not going around the same old story again. It is Life breaking out of the gravitational field of what has been and catapulting itself into a new expression of itself.

We feel the urgency of this evolutionary leap, and that awareness can be a source of despair if we do not know how to initiate it or what our part in it is to be.

The Evolutionary Task Before Us

Coming back to our current political situation, some believe that the task we now face is to resist and ultimately defeat those who see the world differently from us. But that is just the same old revolutionary story.

The evolutionary task before us isn’t resistance. It is the acceptance of Love.

Love is the inherent connection between all things, and as such it is the inverse of separateness. Love cannot be partial because it is indivisible.

Love isn’t something we create. It isn’t even something we choose, because there is nothing outside it to choose from. It is, however, something that we can accept. And that acceptance is what brings about our evolutionary leap.

For many of us, Donald Trump represents the adversary, the threat, the beast who must be stopped.

But actually Donald Trump simply represents the confusion within most of us. He believes that his worth rests in his riches and status. Why? Because he doesn’t comprehend the nature of Love, nor does he comprehend his inherent worth.

Trump’s worth, your worth, my worth reside in the eternal nature of our being. We have emerged from the Source of all Life. We are Love itself, and nothing can ever change that. There is no other Reality.

Love doesn’t trump hate, because Love doesn’t even see hate (which is merely a mask for hurt and fear). Love sees only the divine essence that lies at the core of all Being.

Ridicule, vilification, and even resistance only serve to pull us back into a more ignorant and unconscious way of being. They reinforce the illusion, keeping us in the gravitational field of an old story and delaying the evolutionary breakthrough now before us.

If the only viable way before us is the way of Love, how do we step into it? How can we help initiate this evolutionary leap?

Here is the crucial thing to understand: you cannot extend Love when you perceive yourself to be outside of it.

In the old story, we have learned that if we want to help heal the world, we must turn our attention to the problems “out there” that need to be fixed. But the first step in becoming an evolutionary is to look within yourself and accept one simple truth: you are loved, you are lovable, and you are Love.

Once you accept Love as your Reality, you naturally extend it to others. You no longer see yourself as an adversary of those who see the world differently from you, but as their advocate, believing in their goodness, in the fullness of who they are, in their divine potential, in the inevitability of their awakening. You become an advocate who is unwilling to settle for any policy, any economic system — any story — that excludes anyone.

Here’s the thing about evolution: we don’t know what life looks like on the other side of the leap. We haven’t even the faintest glimmer of what this evolutionary leap will mean for our planet, nor the possibilities it will open to us.

It will be like a tsunami of Light sweeping across the Earth, dissolving barriers and hostilities, which will be recognized as nothing but falsehoods built upon the absurd belief that something can stand outside of Love.

This tsunami of Light begins with the evolutionaries: those who are willing to accept the truth of who they are. It begins with you.