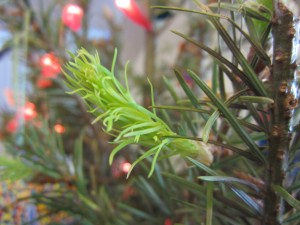 We’ve had construction going on at our house since October and our first floor living space was in disarray until well into December. Consequently, I wasn’t able to get our holiday decorations up until a few days before Christmas, and I decided to leave them up for awhile to make up for lost time.

This past weekend, though, it seemed like enough was enough and I was just getting ready to take everything down when I noticed something that astounded me. The Christmas tree was sprouting new growth. All over.

“How is this possible?!” I thought. The tree, although it had continued to drink water, had also begun to drop its needles. How could something that was dying also be putting forth new shoots?

Needless to say, although the other decorations came down, I didn’t have the heart to toss this brave, resilient tree out into the bleak midwinter.

These last few days our Christmas tree has been my teacher, a silent parable standing in the corner of our living room imparting a wisdom that, from a conventional mindset, seems absurd: that which is dying is bringing forth new life. It is a paradox that speaks to me on many levels.

On the personal level, the tree seems to be mirroring this season in my life when in the last few years an old role, previous associations, a former vocation — in essence an old self — has been passing away. Needles of my former life have been falling right and left, and believe me, it hasn’t always been easy.

And yet, as this Chinese Year of the Snake — that creature that knows how to shed an old skin — draws to a close I can feel how the shedding is coming to completion and I can also feel the new beginnings, the emerging possibilities beginning to sprout in my life.

From its corner of the living room the tree teacher is also whispering to me another message, one that goes beyond the personal, one that reveals important information about our world right now.

Most of us, if we’re paying attention, know that an old world order is dying. The world that we constructed out of the idea that we are separate from the Earth, from our Source, from one another, is unsustainable, and as the environmental crisis intensifies that fact is becoming more and more apparent. We humans have been trying to live on this planet like a tree severed from its roots.

We see the effects of this old world order and its rapid decay. We see how volatile nature is becoming. We see how religious institutions that have brought stability to our society for hundreds and thousands of years are losing credibility and loyal adherents. We see the grotesque inequities in our economic system. We see the coups d’etat corporations have pulled off, wresting control of our democracy out of the hands of the demos — the people. We see the decimation of a once pristine and beautiful planet. We see extinction on a massive scale. Sometimes we even fear the world is coming to an end, and with good reason, because indeed, it is.

The world as we have constructed it is coming to an end, and yet, in the midst of this global dying something remarkable is happening, something that may be so subtle that most of the time most of us miss it, a truth that is detectable on a spiritual plane even though it eludes our senses. Out of this decaying world order a new world is being born. As implausible as it seems, the buds are even now beginning to open, under the radar of our ordinary consciousness and under the radar of the stories our media reports, which we too often mistake for reality.

Watering the World with Love

There is one essential thing without which this miraculous new growth of our Christmas tree wouldn’t have happened: for the past month and more every morning when I get up the first thing I do is check the water level in the Christmas tree stand, and if it needs it, I top it off. This is a critical part of the tree’s lesson that at first, wowed as I was by its new growth, I overlooked.

But there it is: if in early January, figuring the tree was already dying and would soon be taken down, I’d just stopped caring about it, stopped checking it, stopped watering it, the tender, vulnerable green shoots that are now bursting forth would have withered before they even opened. Its potential for new life would have died.

For me, this is the most potent teaching of this parable, that in this improbable emergence of life, which was beyond my capacity to imagine let alone orchestrate, I played an important role.

The same holds true for our world. In this challenging transition that our planet is undergoing, this time of dying, you, I, we all have an essential role to play, because we are the ones who will either water the future with our loving attention or allow it to wither from our cynicism and neglect.

More than ever, during this time of dying away of the old, it is important that we keep loving the world, that we keep watering it with our belief in it, our belief in ourselves, our belief in the Earth and the resilient, beautiful life she calls forth, to keep believing that even though the odds are against us there is a resurrecting power at the heart of Reality that is with us and will not let us go. 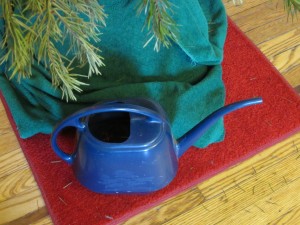