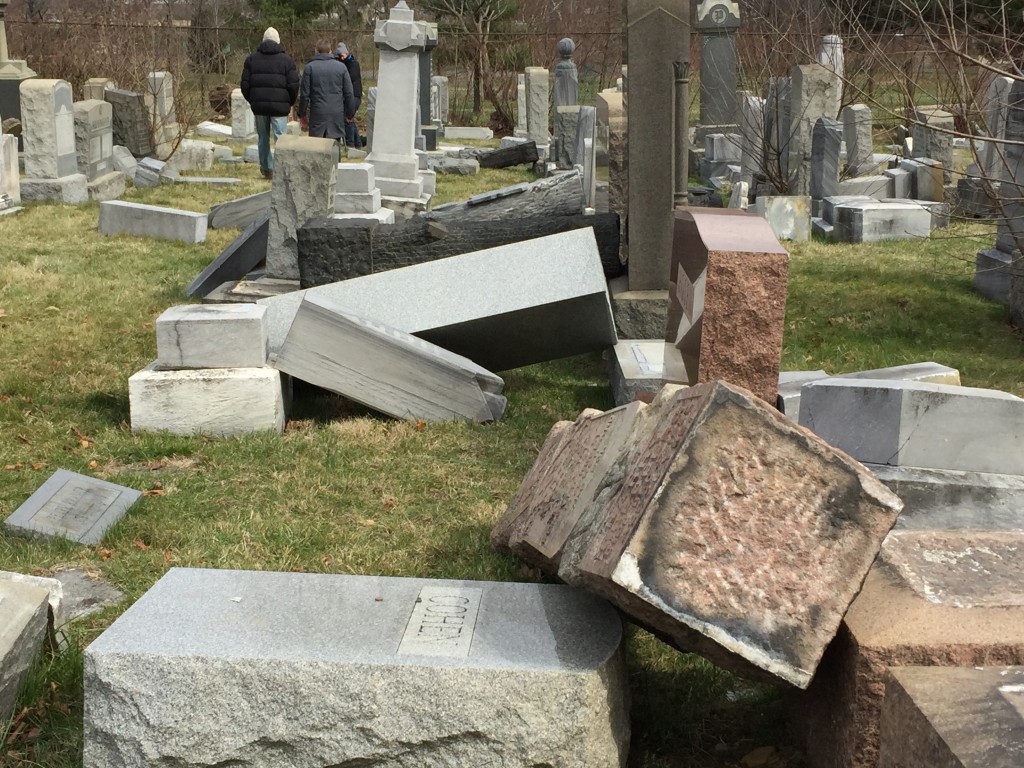 Last week I paid my respects at Mt. Carmel cemetery in Philadelphia, a Jewish cemetery that recently, like others in St. Louis and Rochester, was severely vandalized. Seeing gravestone after gravestone—estimates now say more than 500—toppled with such brute force was sobering. But one thing it wasn’t was news.

News—as the word implies—refers to the new, and bigotry in all its many guises is a very old story. The real news is how thousands upon thousands of people are responding to these acts of bigotry.

In a previous post, Three Ways to Be a Peacemaker in a Time of Hatred, I talked about the importance of solidarity in the face of hatred, and solidarity is exactly what we are seeing take hold. Organizations such as Southern Poverty Law Center have been tracking the rise in hate crimes, but it would be far more telling to track the rise in acts of solidarity.

After the cemetery in St. Louis was desecrated, a Muslim man in Philadelphia spearheaded a campaign to raise money for repairs. The following weekend hundreds of people from St. Louis, of all religions, lined up outside the cemetery entrance, waiting an hour or more to get in so they could help with the clean up efforts.

When the vandalism to the Philadelphia cemetery was discovered, labor unions in the city offered their services to help repair the damage; hundreds of people from across the city, including members of the police force, volunteered to help with clean up; the excess funds from the St. Louis cemetery repairs were directed to Mt. Carmel, and even more funds were raised.

Last Thursday, at a vigil held in front of Independence Hall in Philadelphia, throngs of people gathered to show our support for our Jewish neighbors. One of the speakers, Rabbi David Straus, spoke of his parents, Jewish refugees from Germany, who as children had seen their synagogues burned to the ground on Kristallnacht.
“What might have happened,” Rabbi Straus asked, “if after Kristallnacht the community in Germany had come together as we are doing now?” The answer of course is that Hitler’s so-called Final Solution would have been impossible to carry out.

This turbulent chapter we find ourselves in can go any number of ways, and whether it proves to be one of our nation’s darkest periods, or the moment in history that gave rise to our greatest unity and healing is up to us—and it all begins with how each of us chooses to perceive it.

But if you understand this present time to be a precious opportunity to be involved in the emergence of a new story, you will be filled with hope and resolve. You will understand each act of hatred not as a call for retaliation, but as an invitation to find creative ways to express love. Just as, when a mosque in Victoria, Texas was burned, a local synagogue offered them a place to worship, and more than $1 million poured in to help them rebuild.

Hatred is actually remarkably impotent. It only gains traction when it is met with hatred. The more it is met with love, the more it withers, until finally the old story of bigotry can finally be laid to rest.

As I left Mt. Carmel last week and headed for my car, a Black man was walking toward me. Seeing that I had come from the cemetery, and knowing how people from across the city had been responding, he stopped to thank me and to bless all of us for what we were doing.

When I got to my car and closed the door, I began to weep. Not only from grief over the hatred expressed by the vandalism, but even more so from gratitude for the toppling underway of an old story that has for so long divided us.